OPERANTICS
SingCo Music is proud to present the Y1.9K compatible show, Operantics. This is a compact, 45-minute show. Four of the finest singers in the Washington, DC area provide a fast-paced review of operetta from Gilbert and Sullivan to the 1920’s operettas of Friml, Harbach and others. The program also showcases American popular music of the teens, including vaudeville numbers, parlor song and early Broadway selections. All of this in forty-five minutes!

STUDIO ’37
It’s three minutes to airtime for the evening’s live broadcast at a typical radio station in 1937. But where’s the orchestra? Where are the guest stars, Marlene Dietrich and Bela Lugosi? Stuck in the elevator! Sit back and enjoy being the “audience” in the studio while you watch the skeleton radio staff do all the work! Studio ’37 offers wonderful period songs, hilarious commercials, and a sparkling script kept fresh by new ad libs with every performance. Written by Doug Bowles and directed by Jane Christensen, this entertaining romp is sure to leave you feeling fine. Studio ’37 runs between 45 minutes and 1 1/2 hours, to suit your event.

G.I. JIVE: Letters from the War 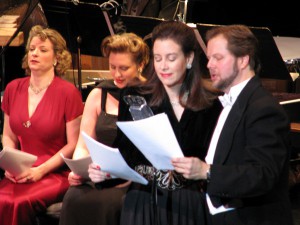 In this “Live” radio broadcast from 1946, Doug Bowles and his SingCo Rhythm Orchestra along with the Hot Biscuit Trio, the Melody Boys and a cast of zany characters take you through a two hour show that will leave you laughing, crying, waving the flag and proud to be an American. Conceived during the WWII dedication celebration and presented live first at the Rock Creek Festival and then by IN-Series in Washington, DC, this piece is inspired by the famous radio shows done by Bob Hope and sent over seas to be viewed as short films by the troops. In one of the actual broadcasts, to meet the request of a troop in the European front, Bob did exactly as the boy asked and had Lana Turner cook a steak in a sizzling hot skillet – anything for the troops! 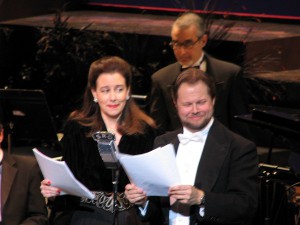 In Doug’s “broadcast” the orchestra and company respond to letters sent in by the troops (based on and inspired by actual letters of the WWII troops) requesting songs that meant a lot to them. This results in a magnificent collection of songs we all know and love, mixed with some rare, marvelous finds new to the ear but true to the period. Interjected are commercials, comedy jabs and an entire radio “drama” called CASTABANCA! It doesn’t take much to know what famous movie from which that one draws its inspiration. Where else would you hear that immortal lines “Play it again, Spam. For old time’s sake” or “You know how to whistle don’t you, Ilka? Just put your lips together and blow…..Ow, Ilka! That one got me right in the eye!” The whole program ends with an openly sentimental and patriotic tribute to all the armed forces. This show is bound to entertain and inspire – worth every penny!